Dr Strangelove, or how I learned to love the Bull 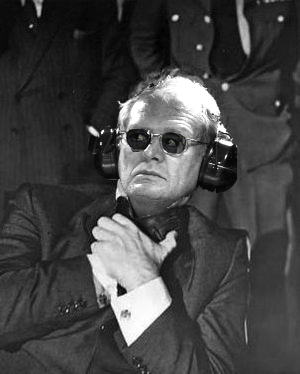 Helmut Marko, sorry: Doctor Helmut Marko, is a bit of a weirdo. In the paddock we call him Dr Strangelove. He got his nickname when someone joked that being whipped by Max Mosley should become a standard FIA punishment, right alongside the drivethrough penalty and five places back on the grid, and Marko immediately said that would not be a practical deterrent for reasons which at this moment must be all too obvious.

It quickly took on, and even Dr Marko himself now plays along. Puts on his suit, the leather glove and the tinted glasses and does the thing where he almost strangles himself. I only wish he took off those bloody headphones once in a while. It’s sign language for “Don’t cross me. I’m someone important in F1.”

I can confirm that last bit. Don’t cross Dr Strangelove. Ever. He’ll strike back according to the trusted old Mutual Assured Destruction doctrine. Called me up the other day, said he’d read my blog post on Mark Webber.

Bernie, he says, do you realise Herr Webber is just an ungrateful little nobody who was doomed to mediocrity until he was lifted to fame by the Great Red Bull Racing team? So I say, well, that’s a bit of a moot point, isn’t it? Right now he’s your number one driver, looks like.

“Yes Bernie, but how did he get there? Which car has permanently had something damaged? Did Mark have the defective spark plug in Bahrain, the loose wheel in Australia, the broken brake disc in Barcelona, the defective chassis in Monte Carlo, the transmission problems in Montreal and now the broken wing at Silverstone, ja?”

3 responses to “Dr Strangelove, or how I learned to love the Bull”