Sarah Palin called. Told me to “man up”

No idea how she got my number, but there she was. Said she’d watched our Tea Party from her house, and that it was really time for us to Man Up. Apparently she couldn’t bear the sight of two dozen manly men, huddling under umbrellas and waiting for the rain to stop in order to go about their business.

Ms Palin, I said, first of all it was not a Tea Party. It was a race. A Formula One Grand Prix at that. And second, it was in Korea. I don’t think you could see it from your house, because Japan is kind of sitting in the way.

“Mr Ecclestone,” she says. (I hate it when people call me that. It’s either Mr E, or Bernie if I know you.) “Mr Ecclestone, don’t try to catch me out like all those socialist media wussies. Many tried and it’s getting old. When I say I can see it from my house that’s proverbially speakin’. And what I do see is what your people say on Twitter. Or actually, my people see that. I try to stay away from it because by gollie, there’s always sumtin’ going wrong when I do it myself.

“And I’ll be gosh darned if I’ll use one of your fancy-pansy French words. You can call it a Grand Pee all you want but for me any NASCAR race is a Tea Party. And browny points for doin’ it in  North Korea, cuz they sure need some democracy over there. The right kind of democracy. Show those Kim Jong Ills some real American values, much appreciated on behalf of myself and all patriotic Americans. Only thing is, you shouldn’t let an itty bit of rain keep y’all from going about your business. So man up, y’all, and keep goin’.” 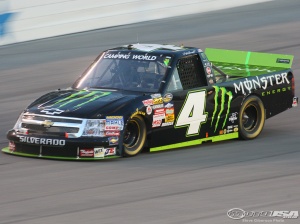 Sometimes you have to let things go. I could’ve gone on about North Korea being a different place, about half a century behind South Korea if not longer, and NASCAR being to F1 what North Korea is to South Korea. But I didn’t trust myself. When hearing her voice, images of household appliances kept popping up in my mind. Couldn’t help but thinking if she was dressed in white as well.

My sources tell me that she might be in a position of power in a few years’ time, say, around the Austin Grand Prix. Sounds weird, but you never know. They’re Americans, after all. And the last thing I want to do is make life difficult for Tavo and the lads.

So I decided to lie back and think of England. Yes, Ms Palin, we’ll man up and get wet. Thank you and God bless.

This entry was posted in Miscellaneous and tagged F1 Korea, man up, NASCAR, Rain, Sarah Palin, US Grand Prix. Bookmark the permalink.