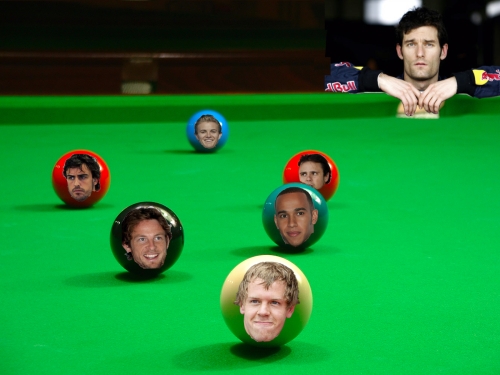 Meanwhile, don’t take this too literally please, tomorrow during the start.

The most retweeted, reblogged photo in F1

Caption suggestions are all over the Twitterverse, ranging from “Check this out, not bad for a second drviver, eh?” to “This is what Red Bull’s tried to do to me all season.” Or “How about this for a tie-breaker proposal?”

Don’t be fooled. people. Whatever he may be, Mark Webber is not a wimp. 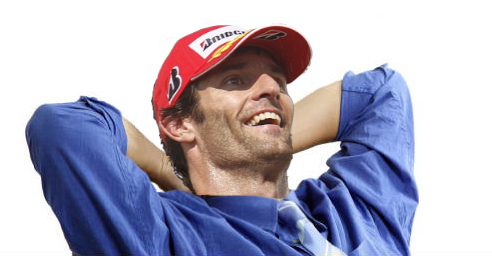 The lad arrived from Australia in a totally different mood from the others. Aren’t you a bit worried about losing your grip on the title? I asked him.

“Not at all. I’m totally, totally relaxed,” he says. “Couldn’t be more relaxed, frankly. Motivated, but relaxed.”

So you don’t care whether you win the title or not?

“Of course I care,” he says. “It’s fucking obvious. But I’m relaxed about it. Being relaxed is the best way to win.”

How about Vettel, then? He says he’s still racing you. Mateschitz backs him all the way. Meanwhile, Dr Strangelove and your boss are scratching their heads how to deal with the team orders or no team orders mess. Are you a first driver?

Hamilton is running around totally fired up, says he’s gunning for the title with all his might.He has a responsibility to McLaren, England, and his fans. In that order, I believe. Aren’t you feeling his pressure?

“Lewis should be more relaxed. He’ll die young if he goes on like that. I’ll tell ya, stress is bad for you, mate.”

My man. This is what true F1 Champions should be made of. Conspiracy swirls around him, competitors are baying for his blood, team bosses breathing down his neck. The press is laying siege on an ongoing basis. But the man’s relaxed.

Hope he’s not on drugs.

The Great Fireman Tradition of F1 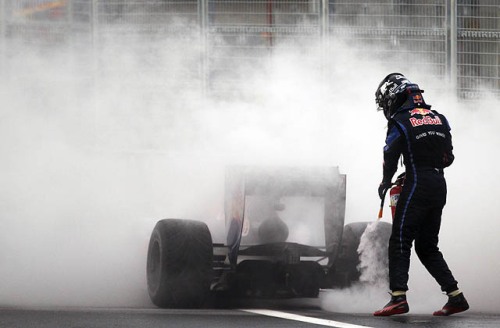 I feel sorry for Sebastian about his eleventh hour engine failure, but I’m happy to see a great tradition emerging. Your car’s on fire, you’re the one to douse the flames. F1’s equivalent of the Captain only leaving his ship when nothing can be done any more. Stuff of legends.

I feel personally responsible for this. For years I’ve shown the way by keeping a fireman’s helmet in my office, and extinguishing a proverbial fire or two. Mostly after having started them myself, but that’s a minor detail.

Keep going, lads. Much praise for our courageous drivers, and for the pit wall crews who hand them their blowers.

The Whiner, the Wiz Kid, and the Wily Ozzie 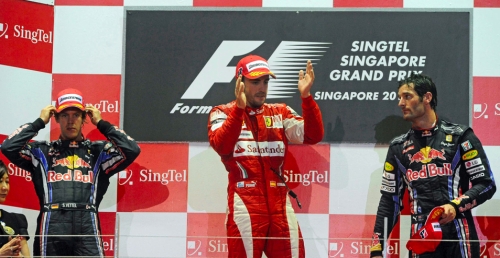 And what a great race it was. Our three Ws were not the only winners. Congratulations, Singapore, for hosting an impeccable event. Congratulations, fans, for witnessing one of the most spectacular races ever. And congratulations, me, for reaping yet another tidy profit of course. But that’s the least important bit.

Well done, Singapore. You may continue for another twenty years as far as I’m concerned.

… Lewis, Michael and Sebastian already did, but they’re rank amateurs compared to this. The lad must live close to work, because he seems to be going through an entire set of tyres inside of seven minutes.

If we weren’t having a cracker season at the moment (and yes, all thanks to my dear friend Max – keep groveling, David ‘Pundit’ Coulthard) then I’d suggest to put in a couple of trials like these halfway each race, for extra Championship points.

Except in Singapore, of course.

Mark Webber: “I was just winging it”

Bumped into Mark, just after he cleared the air with Horner. So how did it go?

“Well Bernie,” he says, “I made it clear that I didn’t sign up to become Vettel’s wingman. Horner agreed completely, by the way. So that cleared the air. He said, for me you two are exactly alike. So I said, you mean like I’m a dead winger? Tell ya mate, the bloke’s got no sense of humour. He says, Mark, this is a serious subject. Not a time for jokes.

“So I said, no problem Christian, I was just winging it. Just like when I made that ‘number two driver’ remark. No skin off my nose. So to cut a long story short, he promised not to try to clip my wings any more, and I promised not to make any more puns. Good on ya, mate.”

People, can we please leave that Red Bull run-in behind us?

Either that, or give Webber and Vettel a wheel nut upgrade.

… on their way in and out of the pit lane. Wheel to wheel, although the lads still have a lot to learn from the taxi drivers in this city.

Vettel in the gravel box

Last seen on his knees in the gravel. Must be looking for a lost spark plug.